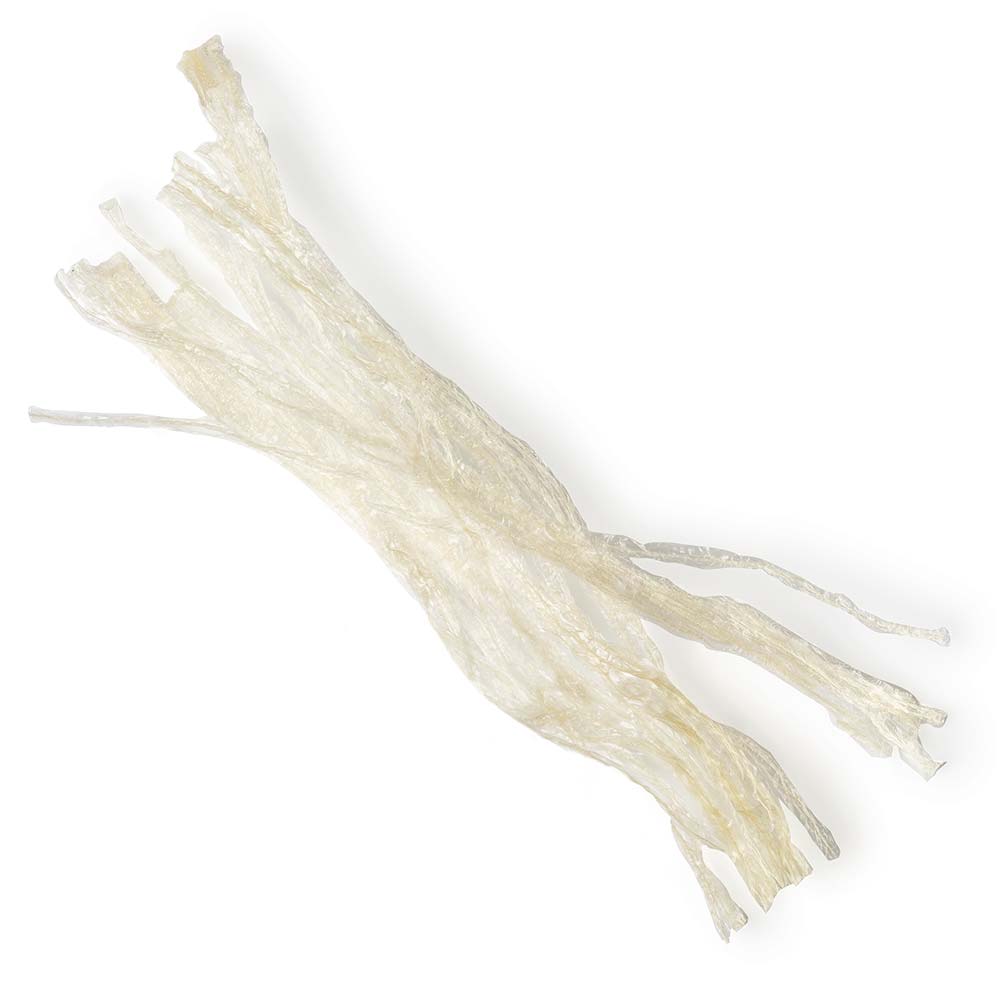 2
Products with this ingredient
View all products

Agar agar is a mucilaginous substance extracted from agarophytes seaweed. Dried to make strands or powder, it jellies again when in contact with water and will soften and conditions if applied on the skin.

Agarophytes, which have a tufted appearance from their fine fronds, are found in most seas of the world. Their colours vary from pinks to deep reds and purples, camouflaging their chlorophyll. To make agar agar, the seaweeds are collected and dried. They are then boiled in water and filtered to extract their gel content called agar agar. The substance is dried again and prepared into bars, strands or fine powder for stocking and transport convenience.

Very famous in cooking, it is thought to have been first discovered and used by the Japanese to thicken meals or create nutritive noodles. It's now renowned worldwide to be a good alternative to animal-derived gelatine.

Agar agar is often used in Lush products in a powder form to thicken or jelly liquid formulas. The strands take more time to dissolve in water and that's the effect we're looking for: floating in the bath and looking like plastic, they are a reminder of the dramatic current situation in oceans and seas of the world. Luckily, agar agar is good for skin and hair, and biodegradable, unlike plastic. It is one of the many incredible things the seas provide and are worth to be preserved.

Agar Agar Strands can be found in these products

The state of the ocean: plastic, plastic everywhere

Swirling islands of debris are gathering atop a blue planet that currently holds over 150 million tonnes of plastic.

The true impact of plastic in the oceans is beginning to emerge, as marine life becomes trapped in sea litter and microplastics find their way into the food chain. Scientists have found that creatures at the bottom of the food chain are ingesting plastics floating on the surface of the ocean.

At the current rate, it is predicted that the ocean will contain more plastics than fish by 2050, according to the Ellen Macarthur Foundation. The report claims that eight million tonnes of plastic leaks into the sea every year, the equivalent of one rubbish truck being emptied into the ocean every single minute. This could go up to two per minute by 2030 if nothing is done.

The problem with microbeads

Microbeads have been a recent source of controversy.

Often found in products such as face scrubs and toothpastes, microbeads are too small to be filtered out of sewage treatment systems. After being washed down the drain, they soon find their way into the marine environment. One shower with microbead-laced products can result in 100,000 of the particles slipping into the ocean.

Until recently, 680 tonnes of microbeads were used in cosmetic products in the UK every year. In January 2018, the Government banned the manufacture of cosmetics and personal care products containing the tiny plastic particles.

Spanning the width of the ocean from the West Coast of America to Japan lies the Great Pacific Garbage Patch, one of several across the world. A spinning vortex of marine debris, the patch of rubbish in the sea is made up of two areas swamped in plastic -  the Western Garbage Patch and the Eastern Garbage Patch. Both are created when debris makes its way to the centre of ocean gyres, which are circular currents created by wind patterns, the rotation of the planet, and landmass.

The patches are mostly made up of microplastics: particles which used to be plastic bags, bottles, and other waste products, and have since been broken down by the sun. The effect is a swirling expanse of cloudy water - these are materials which will never degrade. Larger items of rubbish float among the soupy water. Beneath the surface, further rubbish pollutes.

Until recently, the size of the area was unknown. However, this aerial survey shows that the nucleus of the Eastern Garbage Patch, between Hawaii and California, is around 386,000 square miles, around 30 times the size of Belgium.

Amid the debris, mammals drown when they become trapped in abandoned fishing nets. The very bottom of the food chain is affected too, when the sun’s rays are blocked by the plastic layer on the ocean’s surface, stopping algae and plankton from producing their own nutrients.

Research from The University of Queensland shows that over 50% of sea turtles have ingested plastic bags, mistaking them for jellyfish. Turtles are specially evolved to be able to swallow slippery jellyfish, with backwards facing spines in their throats meaning that once they begin eating something, they are unable to reject it.

The people tackling plastic in the ocean

Around the world, individuals and organisations are fighting to clean up the ocean.

Sea Shepherd, an international marine wildlife conservation group, organise regular coastline clean ups, helping to keep as much litter out of the sea as possible.

However, the clean-ups go beyond litter picking; by analysing the data gathered, more can be found out about which plastic items are having the greatest impact on the environment. They hope this is the key to prompting governments into making necessary changes.

Since 2015, the group has been working with 5 Gyres, an organisation working against plastic pollution, to trawl for plastic debris in the ocean. They discovered an abundance of microplastics. The programme has now been expanded throughout the whole fleet. Thousands of animals have been cut from nets, and several pieces of plastic have been found in the digestive systems of illegally caught toothfish during Sea Shepherd’s campaign, Operation Icefish.

Spokesperson Michael Beasley said that consumers have the power to influence change: “By becoming more aware of the damage plastic is causing, and changing our spending habits so we are buying less 'stuff' (things we don't need) and opting for reusable, eco-friendly items when we do need to make purchases, we can greatly reduce the amount of harmful waste ending up in landfill and in our natural environment.”

He aims to pick up at least three items of litter a day, and encourages others to follow his lead.

Environmental charity, Surfers Against Sewage, is also taking the problem of marine debris into its own hands.

She joined the group after she fell in love with surfing, and wanted to do something about the vast amounts of waste in the sea. She said: “Being in the ocean is an incredible feeling, one that should be pure and cleansing.”

Ffion spent a year going plastic-free, and encourages others to take action against plastic waste: “If you want to get really active, contact your local MP, tell them that you're unhappy with the litter you're seeing, and express your concerns. Hopefully the more pressure our councils and local government receive, the more likely they are to tackle these issues.”