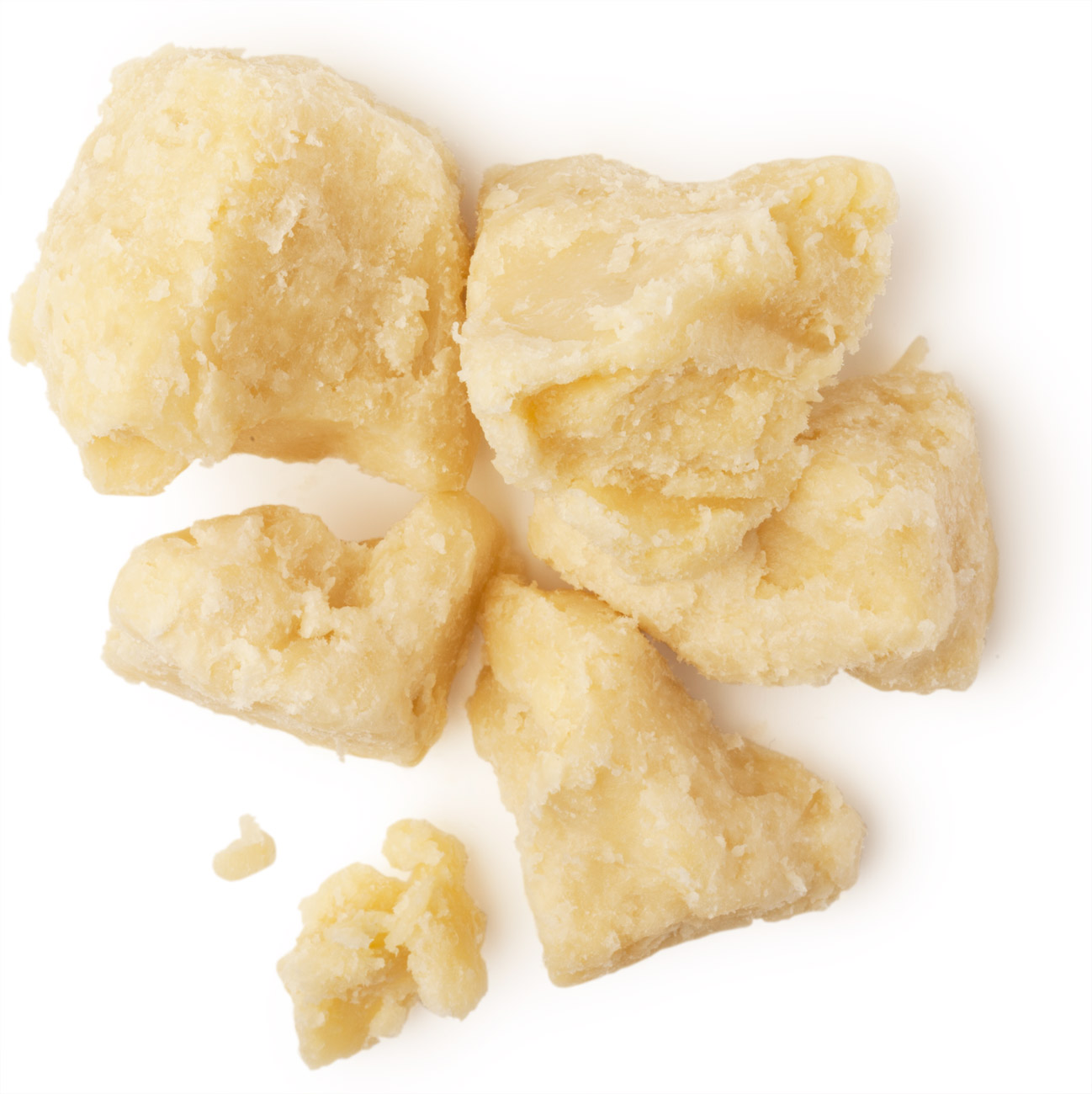 97
Products with this ingredient
View all products

Shea butter moisturises and conditions the hair and skin while giving a very smooth and soft feeling thanks to its emollient properties. It has a whipped texture that easily melts at body temperature.

Shea butter is the ivory-coloured fat extracted from the nut of the vitellaria tree (Vitellaria Paradoxa or Butyrospermum parkii), which is native to Africa, and more specifically the Sahel region. To obtain the butter, the nuts are dried and crushed before being roasted and pressed into a silk liquor. This is then whipped and kneaded in large pans until fat forms on top.

Shea has a lot in common with cocoa butter and has often been used as an alternative in the chocolate industry. Both contain oleic acid, a mono-unsaturated fatty acid that is highly compatible with our body's natural sebum and allows the butter to be more easily absorbed into the skin.

They also contain stearic acid, a skin-softening fatty acid that acts as an emulsifier. This means that the butter helps bind oil and water together, preventing products from separating. Combined with the solid nature of the butter, this emulsifying property creates tight emulsions that leave no room for microbes to move and grow, helping products to remain fresher for longer.

The knowledge and expertise surrounding shea butter’s extraction process are passed down from women to women through the generations. Nowadays, it provides income to many women's groups and cooperatives across the Sahel. Lush buy from two suppliers working directly with women producers in Ghana; one is certified organic while the other is Fair Trade. Each butter is refined to neutralise colour and aroma, a common practice in cosmetics as it could interfere with other ingredients.

Fair Trade Shea Butter can be found in these products

The women of Bolgatanga, Ghana, expertly whip and knead large pans of liquor. The raw, enigmatic scent of Earth rises from them, hinting at what the molten contents will become.​

The Frafra are traditionally subsistence farmers - growing crops to sustain their families rather than to sell. They work small plots of land throughout the wet season and save food for the dry season - known locally as ‘the hungry season’ due to low crop yields.

In the past, women of the Upper East Region of Ghana were forced south each year by the arid conditions.The necessity of finding work often meant they were separated from their children and community.

Welcome change arrived in the form of the Ojoba Women’s Shea Cooperative, which took advantage of the karite trees that grow wildly in the local environment. The women themselves brought skillsets passed down through generations, including the tried-and-tested method of processing shea butter by hand.

First they collect, sort and wash the nuts, picking out any blackened ones that could compromise the quality of the butter. The good nuts are then removed from their fleshy pods and boiled, before being dried under the intense heat of the African sun.

After being scrubbed clean and dried again, the nuts are fed through a simple crushing machine so only a chunky crumb remains. This crumb exposes the inner flesh, which is roasted over a smoky, open fire until it becomes almost praline-like.

At this stage, it is pressed mechanically into a liquor that resembles melted chocolate, before being whipped by hand using rhythmic, sweeping motions to form a dense layer of shea butter on top.

The 500-strong cooperative provides the women with a reliable source of income all year round. Outside of the farming season, scarcity of work had previously forced many of the women, and their children, to leave the area each year.

Now, they can offer material as well as emotional assistance to their families, and can afford school fees and national health insurance. Through a microfinance scheme, co-operative members also have the opportunity to apply to borrow funds to set up their own businesses.

As self-improvement and ambition flourishes, the group continues to succeed, and introduce new, regenerative ventures. Recently the women celebrated the opening of their new community library - the first rural library in the Upper East Region district.

“I always feel happy and strong when I’m with my women,’ says senior co-operative member Atanpoka Abongo. “Sometimes I’ll have a problem at home that I think is too difficult, but when we’re sharing ideas I realise that I can handle it. They encourage me to face anything.”