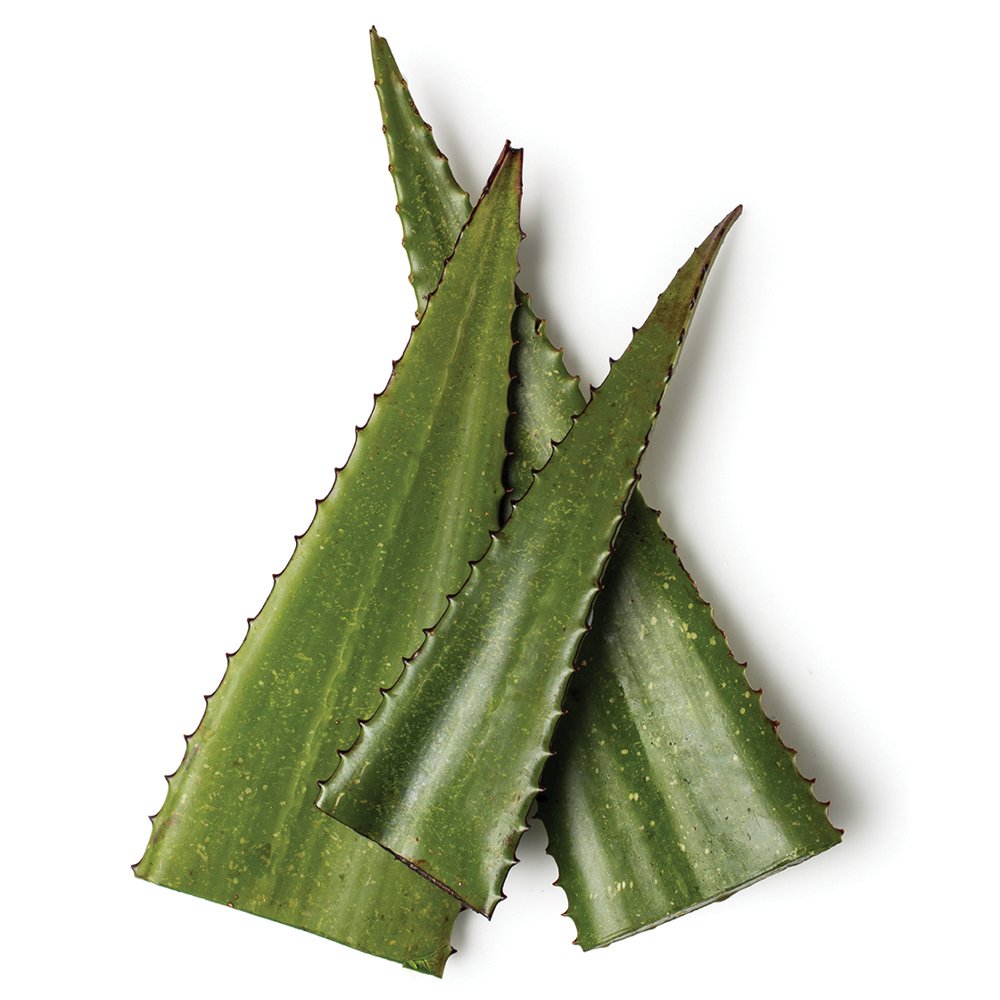 Aloe is thought to be one of the oldest remedies, noted for its healing qualities. It soothes and hydrates the skin and the cooling sensation you get when applying it topically is calming for sunburn. It is also antibacterial and leaves the skin very soft.

Aloe secundiflora is a desert plant that belongs to the lily family. It grows well in dry soils and is native to East and South Africa. The fleshy leaves are covered with white dots when the plant is still young, which then disappear with time, becoming long, green, serrated, and filled with a colourless gel.

Lush buy Aloe secundiflora leaves from Maasai women's groups in Laikipia, Kenya. In a landscape prone to drought, both grazing livestock and growing crops has become difficult, but aloe copes perfectly with the conditions as it is indigenous to the land. With support from the Laikipia Permaculture Centre, the women's groups are putting environmental regeneration into action, whilst making a living from selling aloe.

The leaves are shipped to the Lush factory whole and are freshly cut to extract the gel.

Fresh Aloe Gel can be found in these products

In harsh conditions in Kenya, Maasai women are supporting themselves by growing aloe, and rejecting negative traditions. Lush Times reporter Katie Dancey-Downs travelled to Kenya to meet some of the women, and find out how their lives have changed

Warning: This article contains themes that might upset some readers

In Twala, Laikipia, 32 Maasai girls prepare for a ceremony. Muratina ‘beer’ has been brewed for the men from aloe roots and honey, and the local community has gathered. The girls are clothed in black garments, traditionally worn for “the cut”, otherwise known as female genital mutilation (FGM). FGM is illegal in Kenya, but it still takes place.

The girls from Twala and the surrounding areas appear in front of the crowd, and together they sing in their traditional Maa language. Their song is anything but traditional.

Their voices are defiant: “We are saying no to the cut!”

For the girls of Twala, FGM ends at that moment. This has been a long time in the making.

Rosemary Nenini is the coordinator of the Twala Women’s Group, and she is the driving force behind the changes that have happened in this community. She has dedicated herself to preserving many aspects of Maasai culture, like beadwork, knowledge about medicinal plants, and the community lifestyle, while working to eradicate what she sees as the bad parts of the culture - namely FGM, early marriage, and a lack of education for girls.

“I am a victim of all these things, FGM and all that. At least when I got married, I was lucky because I married a good husband,” she says. Her husband allowed her to further her education, which she then used to make positive changes.

In the past, girls undergoing “the cut” were around 16-18, but this age dropped to between 10 and 13, Rosemary says. The young girls experiencing this were left with trauma, and Rosemary herself will never touch a razor blade, even now.

Rosemary believes that the reduction in age has happened due to poverty. Some of the older members of the community told Rosemary that if girls are not cut, no-one would want to marry them. Girls were being married off at younger ages, which means they were being cut at younger ages too.

“In the old days the Maasai were not poor, but nowadays there is poverty. So for you to get wealth, you exchange your girl for goats, sheep, and cows,” she says.

Rosemary wanted to see girls valued equally to boys. Starting out on her change-making journey, she joined a women’s group, which eventually joined with five more to form what is today known as Twala. They started by spending their time creating traditional Maasai beadwork and constructing houses.

Rosemary wanted the women to say no to FGM, but the older women in the community refused. When she asked them why, they said: “Because it is a passage from childhood to adulthood.”

So Rosemary took a different approach: “Let’s say no to FGM until after high school.”

Everyone agreed, and in 2008, the Twala women made a constitution to this effect. Rosemary was playing the long game...

The girls went to school - uncut, and unmarried. While they were there, they had the chance to mix with different people, expand their knowledge, and form their own identities. By the time they had finished school, girls were starting to say no to FGM.

In many other groups around the area, FGM is still practiced - or, as Rosemary suspects, people might not admit openly that they have stopped the practice in order to avoid starting conflict.

Creating the change at Twala wasn’t easy for Rosemary, particularly when persuading the men. She tells me that her life was even threatened, but nearly a decade later, the specifics are still too painful for her to talk about.

As she tells me the story about the first girls who rejected “the cut” at the ceremony, I am lost for words. I was expecting her to tell me the story of one brave young woman, not 32 prepared to stand together.

We’ve just been welcomed to Twala with traditional dancing, and I have heard for myself how powerful the women’s voices are when they sing together. This story shows how strong collective voices can be, and how communities can support each other in standing up to injustices.

There was another factor that spurred on the change at Twala, something that would change the financial dynamics - aloe.

In Laikipian Maasai culture a lot of work falls on the shoulders of women. They fetch the water, cook, look after the animals, and raise the children. All this is often without any money of their own. The Maasai are traditionally pastoralists, but land degradation, due to overgrazing, has forced people to adapt in order to make any kind of living. In this bare landscape prone to drought, growing crops can too prove difficult.

But the Twala women had an idea - they would grow aloe secundiflora, and sell it to the men so that they could make their muratina brew. Aloe is the perfect plant to cope with the tough conditions of the region, and has roots in Maasai culture - alongside being used to make muratina, the indigenous plant also has medicinal uses for both livestock and humans.

“If a woman can be in a women’s group and earn a bit of money, and the man can get money elsewhere, then they won’t sell girls because of poverty,” Rosemary says, explaining why the aloe has been so important in supporting gender equality.

The women approached the Maasai men, and asked for some land. The men were initially dismissive of the women’s idea, but they eventually agreed, and gave the women 40 acres so they could use permaculture principles to grow aloe, alongside other projects.

The women soon had a visit from Joseph Lentunyoi, a Maasai man who founded the Laikipia Permaculture Centre nearby. He began supporting the women in growing according to permaculture principles, where practical farming techniques that work with nature are used to help restore damaged ecosystems. The ideas always came from the women, but Joseph brought technical expertise, teaching the women about permaculture and how to best space the aloe.

Before long, Joseph brought along a representative from Lush, and from there the relationship grew, as the Twala women (and women from three other neighbouring communities), began selling aloe to both Lush, and to local Maasai women making soap.

“Permaculture is an ancient way of life which we left, maybe because of the Western influence, or education, or religion,” Joseph says.

“When we started teaching women’s groups about permaculture, they were saying, ‘Oh wow! We used to do that, but we stopped! We must start it again!’”

The women have been so successful, that the Maasai men now ask them to recruit their wives to the group.

How Maasai knowledge gels with permaculture

The changes at Twala show a shifting culture. These women have rejected particular elements of Maasai culture, and at the same time are preserving traditions like beadwork, singing, and communal lifestyles. And as some parts of the culture are turned away, new traditions are being welcomed.

Unusually, Priscilla was allowed to go away to school, encouraged by an aunt who had become a doctor in Russia. All the way through her education, she knew she needed to return to her community, and help make positive changes.

When Priscilla first arrived at Twala, the land was very bare, and experiencing deforestation. Now, trees are being conserved, and the birds have returned. Organic compost is made here. There are beehives, herbs, and trenches for water run-off, supporting vegetation growth.

Early on, the women faced challenges from the local wildlife. Firstly, a porcupine snuck into the aloe and ate a considerable amount. Next, a herd of elephants walked straight through the crops, trampling over 100 aloe.

Using Maasai knowledge and learnings from nature, the group found solutions. A wire mesh fence dissuaded the return of the porcupine, and swinging beehive fences sent the elephants on a different path, while having the added benefit of bringing in honey.

Through her work at Twala, Priscillia is now able to fund her younger brother’s schooling, as well as pay for someone to look after her parents’ livestock in her brother’s absence.

Twala is not the only Maasai women’s group reaping the rewards of aloe; a further three groups in the region are now being supported by LPC and selling to Lush. The newest of those groups is Osuguroi (the Maasai word for aloe), where the women have been growing aloe for a year.

Sitting on a grassy hill, Priscilla translates as the women talk to me about how growing aloe is helping with income, and improving their living standards - they can now take their children to school.

This group is just starting out, and the women have both big ambitions and challenges to overcome. Once a year, elephants travel across the land causing damage to the crops, and some people are letting animals in to graze. Like Twala, Osuguroi will work with nature to solve these problems. The more income they generate, the more they can do on the farm. Mostly, the women say how proud they are of what they have achieved. People could have cut down the trees and grass, but the farm has been conserved.

When I travelled to Laikipia, I never expected to see a direct connection between aloe and stopping FGM. But without people like Rosemary pushing it forwards, these changes would never have happened - aloe or no aloe. Rosemary wants more communities to adopt these changes, and it’s clear she has the determination to make that happen.

Check out the new Source to Skin film, as Lush Presenter Kelly travels to Kenya to find out how aloe gets from the ground into Charity Pot, or read more about the Laikipia Permaculture Centre.

This story shows how strong collective voices can be, and how communities can support each other in standing up to injustices