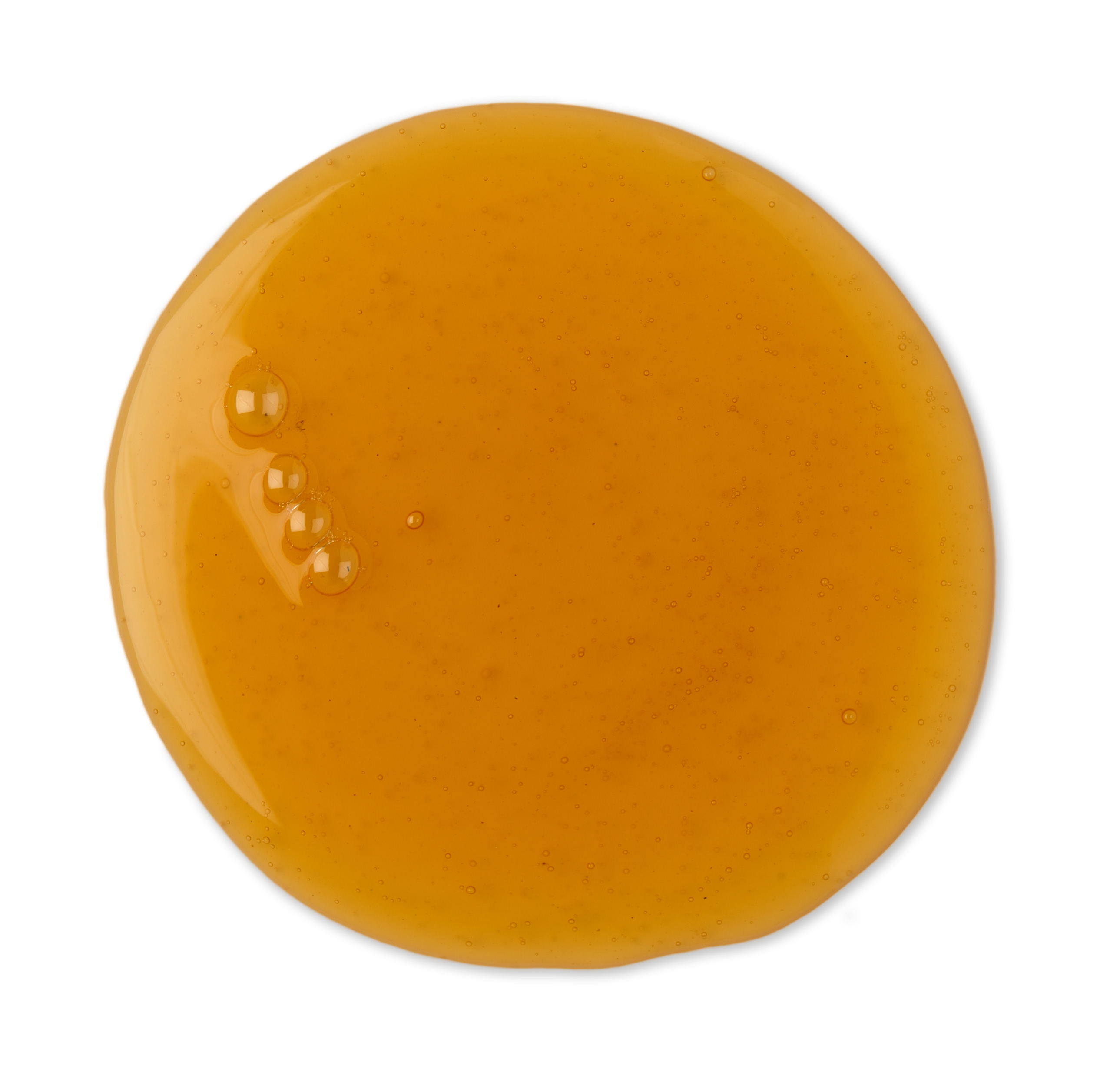 22
Products with this ingredient
View all products

Honey is a fragrant, sweet, sticky liquid made by the hard-working honeybees. The benefits on the skin and hair are vast as honey contains lots of nutrients, is humectant, antimicrobial and antioxidant and has shown great wound healing properties over the centuries.

Bees collect nectar from flowers and carry it to their hives where the worker bees convert it into honey. Half a kilogram of honey contains the essence of about two million flowers and the colour, fragrance and properties of honey vary depending on the varieties foraged. Bees need to make thousands of round trips to collect nectar, and a single bee produces only about a teaspoon of honey during its lifetime.

Honey is imperishable and is also a natural humectant, which means that it attracts and retains moisture. This is good news in cosmetics as it protects the skin and hair, keeps them moisturised and conditioned, while contributing to the preservation of products formulae.

Lush source clear honey from the Barro Vermelho community in Brazil. Bees’ welfare is at the heart of their practice and the community sees beekeeping as a communion with nature, a way to have better lives while helping to increase the bee population and land’s regeneration.

Honey can be found in these products

Beekeeping in Brazil: Working with nature to restore the ecosystem

While some honey producers have a bad reputation for bee welfare standards, many beekeepers are doing things differently. The Barro Vermelho community in Brazil is using beekeeping to help regenerate the natural world, increase bee populations, and simultaneously create a better life for people. At the Lush Summit, the leader of this community, Eusebio De Carvalho, told his story to Lush Times writer Katie Dancey-Downs

In rural North East Brazil, the frantic hum of bees surrounds the Barro Vermelho community. This sound represents something far greater than just a money-making business - it is these bees which have allowed the people here so much freedom.

This is a community descended from enslaved people, and artefacts born of that painful history still remain. It is difficult to forget those indignities, when the old houses where their ancestors were taken to be beaten and punished, still stand.

Eusebio De Carvalho is the leader of this community. He talks openly about the distressing history his ancestors have suffered at the hands of the white men and women who enslaved them. He speaks of his ancestors being dominated and beaten by those who held more power.

“All of that ended when slavery was abolished, and enslaved people were given their freedom,” Eusebio says.

This community fought long and hard to be nationally and internationally recognised as a Quilombola community, and on 29 March 2013 they were finally successful. After a lengthy process, they are now officially acknowledged as descendants of enslaved people in Brazil, and as such, eligible for support from the state. The Barro Vermelho Quilombola community now has legal support through a legal entity called Palmares. This, Eusebio says, makes them feel well represented and strong within Brazil, making them ready to fight against any further injustice.

Becoming recognised as a Quilombola was a victory - but it was only one part of the story. In the past, Eusebio says, the community lacked structure. There was no organisation, and no freedom. They relied on growing corn and beans to provide an income, and it was nowhere near enough.

Today, the story is very different. This is down to one thing - beekeeping. The idea first emerged when an Italian beekeeper visited the community in 1999, and shared some of his knowledge.

“He gave us a lot of encouragement. Those that had the will to pursue beekeeping as a way to make a living didn’t turn back,” Eusebio explains.

There, at the beginning, was a lot to learn. The new beekeepers made the most of basic training opportunities offered by SEBRAE, a government institution. And soon, they had forged partnerships with other beekeepers in the region. Eusebio took up more courses, and spent time with expert beekeepers in the Picos region, then brought his new skills home to the community. The beekeepers in Barro Vermelho eventually formed an Association, so that they could work better together.

“Today, I feel happy. We are super organised, developed, and a very popular community, and everyone that lives here is happy to belong here. It’s a community that is growing everyday,” Eusebio says.

Honey farming is not always a pretty picture, and industrial beekeeping can include harsh conditions. Bees face being overworked, moved constantly, and crammed into small enclosed spaces. To stop Queen bees from swarming and leading the bees to a different hive, it is common practice to clip their wings. Finally, as autumn draws to a close and the last of the honey has been collected, bees are often culled.

At Barro Vermelho, they do things very differently. Bee welfare standards are high, and intervention is kept to a minimum. The beekeepers rear their own Queens through natural succession, and do not stop the colonies from swarming. The Queens are free to follow their natural instinct - wings intact.

The bees’ welfare is at the centre of everything - even when it comes to collecting honey. Anything in the lower hives, where the brood chambers are (and where the Queen lives and lays her eggs), is left for the bees. Only surplus honey is collected for human consumption. The people never take more than the bees can spare.

The Fair Trade organic honey is sold to a collective, Casa Apis, which was founded in 2005 by a beekeeper, Antonio “Sitonho” Dantas, who wanted to make a contribution to the social fabric of the State. He decided it was time that beekeepers started working together, instead of against each other. Casa Apis is now the umbrella organisation for five large cooperatives in the Picos municipality, representing over 1,000 beekeepers. The honey makes its way to North America and Europe, and Lush is one of its customers.

When Eusebio started on his journey as a beekeeper, he had one dream - he wanted a better house. The financial benefits that have come alongside beekeeping have turned around the prospects of the community, and living conditions have improved hugely. So much so that Eusebio got his wish, and has moved into his dream home.

“All the beekeepers have been able to buy their own vehicles. They are proud to say that it came from the honey,” he says.

When someone wants to become a beekeeper, Eusebio and his team help them make a plan. He asks them how they want to change their lives? While everyone has their own dreams, beekeeping at Barro Vermelho is a collective project, where everyone works together towards the same goal.

At Barro Vermelho, humans and nature are working in harmony, which means the humans respect the bees. But this is a community that goes beyond sustainability. It is actively regenerating the land, economy, and bee population.

Beekeeping, Eusebio says, is the star of the community.

Bringing back the forest

Aside from the impact on human lives, there is another benefit to beekeeping in the Barro Vermelho community. It has taught people to care for the environment.

This is a region that should be home to about 40 native plant species. It should have a balance between hot, dry, long winters and short blasts of rain throughout the summer, which help the native flora come into bloom - essential for bees. But thanks to the impact of climate change and ongoing deforestation in the region, this is no longer the case.

Tough climatic conditions mean that rainfall has dropped dramatically, from about 600mm to 200mm per year. For these beekeepers, following the weather forecast is about more than deciding whether to step out with an umbrella. This is about whether they can expect a bountiful crop, and therefore better economic security. Without the rain, the flora may not bloom, which has a huge impact on the bees. When this happens, swarms may leave the area in search of nectar elsewhere.

“The biggest factor in causing this lack of rain is the reckless deforestation caused by humans,” Eusebio says.

He says this whilst acknowledging the part he played himself in the problem since, historically, he was one of those who used to clear land for agriculture.

But things have changed. Caring for bees means caring for their habitat, and the people of Barro Vermelho have learnt the importance of nature, and the widespread damage to the ecosystem that deforestation causes.

“In the past there was this reckless deforestation taking place. Now the focus is to reforest and protect, whereas once we did the opposite,” Eusebio explains.

The families in the community are becoming true ‘Guardians’ of the land. Together with Casa Apis, Barro Vermelho is now working on a new reforestation project which involves families being given native species to plant and care for. As native vegetation returns, the bee population is given a fighting chance of survival.

This community, which has its roots in such a painful history, has found strength from beekeeping. The people have taken control of their story, and changed it for the better. But what is so important, is that they have worked in harmony with nature, and rejected the idea that humans and nature are seperate.

Find out more about Eusebio De Carvalho in his interview with Lush Life, or watch the Lush Summit 2018 panel on bees and honey.