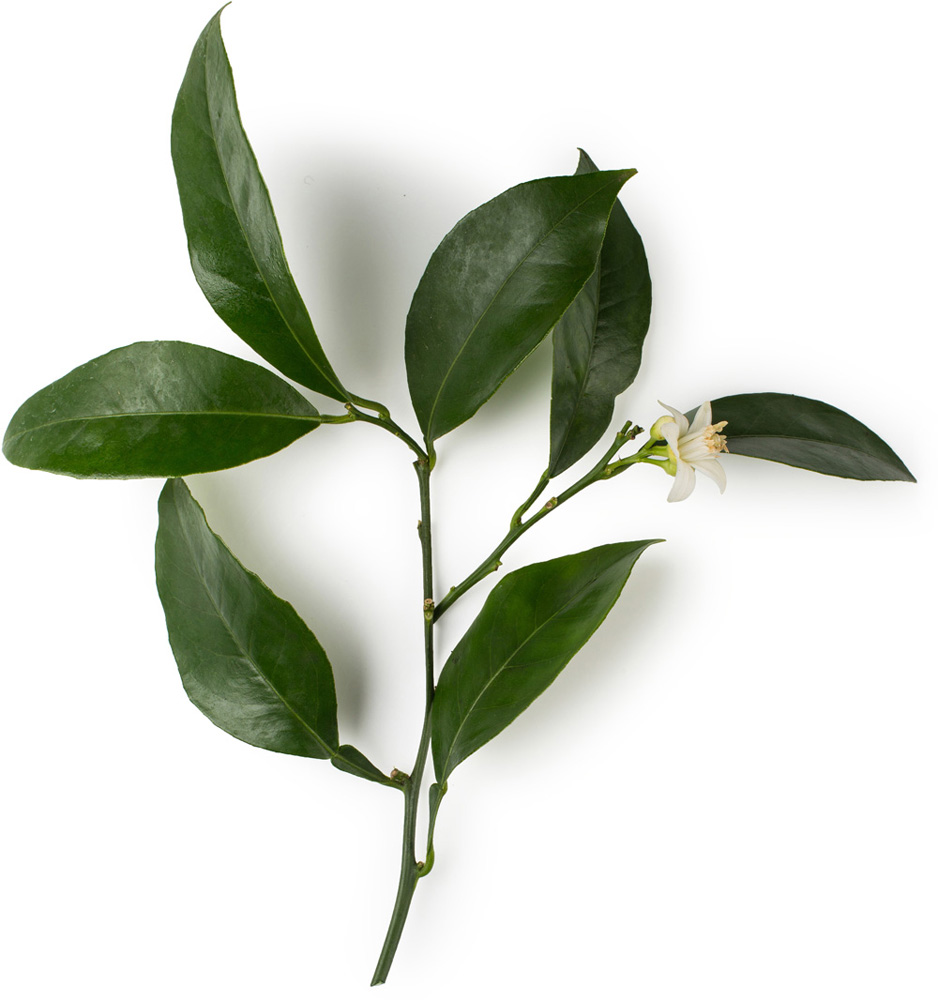 Neroli oil has an intensely green, citrus and floral scent, reputed to cheer the mood and help find inner peace. On the skin, the oil is toning, soothing and antimicrobial. It is also thought to be an antioxidant, protecting the skin from external assaults like pollution or sun rays and improving cells’ ability to regenerate.

The bitter orange tree (Citrus aurantium amara) is an evergreen member of the Rutaceae plant family. Many parts of the tree are used for perfuming and culinary purposes: the fruits flavour food and drinks, the flowers are distilled to produce neroli oil and orange flower absolute and, finally, petitgrain oil is obtained from the leaves and twigs of the tree.

Marie-Anne de La Trémoille (1642 - 1722) named the bitter oranger flower oil "neroli" after the city Nerola in Italy of which she was the princess. She loved to wear the oil as a perfume and created a trend in European royal courts - she would probably be called an influencer nowadays.

As its name suggests, this essential oil is produced in Lebanon. Although widely used in aromatherapy for its stress-relieving effects, neroli oil is a true luxury as the distillation process requires a lot of flowers for little oil.

Lebanese Neroli Oil can be found in these products

In search of regenerative neroli

Bright, uplifting neroli oil is renowned for its joyful scent and skin soothing properties, but a global shortage means Lush has taken important steps to ensure its use is as regenerative as possible.

Neroli is one of the most cheerful oils used in cosmetics today. Derived from the beautifully-scented bitter orange blossom tree, this uplifting floral oil boasts a whole heap of beneficial properties that make it a real treat for hair, skin and soul.

Its use throughout history is well documented. In ancient times, neroli oil was used to treat the plague and relieve fever. Science might not have been up to scratch back then, but they were definitely onto something as it’s been proven to contain antimicrobial and antioxidant qualities. So while we might not need it to combat the plague any more, it makes a great addition to products with protective attributes, such as shielding skin from pollution and improving cells’ ability to regenerate.

Neroli oil became particularly popular in the 17th century, thanks to Marie-Anne de La Tremoille (1642-1722). She was the influential princess of an Italian city called Nerola, and loved to wear the oil as a perfume. Fashionistas of the day followed her lead, and it soon became a trend in European royal courts. Marie Antoinette and Napoleon Bonaparte were also reportedly big fans, using it as an everyday perfume and aftershave.

Today, neroli is still predominantly used as a fragrance, added to products because of its delicate, fresh and uplifting scent. And not only does it work really well with other fragrance notes, it also acts as a natural fixative that helps maintain the original composition of other oils used in a product, so fragrances stay true for longer.

But despite its popularity, neroli is in short supply. It takes at least 1,000 pounds of orange blossom – from which it’s distilled – to make just one pound of oil. And the limited amount produced around the world has to be shared among the global cosmetics and aromatherapy industry (it’s even rumoured to be a closely-guarded secret ingredient in a very popular soft drink).

The oil is most commonly produced in Northern Africa. Egypt is a major producer, but in any given year the whole country’s output will amount to around just 1,200kg. For the last few years Lush predominantly obtained their organic and conventional neroli oil directly from an Egyptian producer, who is also our long-time supplier for jasmine absolute. If necessary, small quantities can also be purchased from a Tunisian producer, who's been providing us with orange blossom absolute for many years; another extract obtained from the same flowers as neroli oil.

It’s important for us to seek out increasingly regenerative sources, finding high quality oil for our range of neroli-based products in a way that supports the environment and benefits the people producing it. One new avenue we’re exploring is Lebanon. The Middle Eastern country’s long, hot and dry summers, peppered with short, cool rainy winters, make it an ideal climate for the bitter orange blossom tree, and indeed citrus products are one of Lebanon’s biggest exports.

But sustainability isn’t just about the volume of plants that are cultivated and subsequently harvested. It’s also about the wider areas in which these plants are grown – their wildlife, their ecosystems and the people that live within them. This is why it is important to work with likeminded producers in Lebanon and create a relationship that enables all of these things to flourish.

Bird hunting is a major problem in Lebanon, with some 2.6 million birds shot or trapped illegally during migration periods. Lush only purchases bitter orange tree blossoms from farmers in the country that guarantee their lands and orchards are designated ‘no hunt’ zones, and we work with BirdLife International – a global charity that works to protect hundreds of thousands of birds across at least 399 species throughout Lebanon and the rest of the world – to make sure these requirements are enforced.

Blossoms from these farmers are then taken to small-scale orange water producers – family-run businesses that have honed their craft in distillery over many generations, using traditional old-fashioned copper stills kept in gardens and sheds. Their expertise, skill and attention to detail guarantee the highest quality oils while supporting Lebanon’s local economies.

Our pioneering producer relationships won’t reduce the growing global demand for neroli oil, but they are an important step in creating regenerative relationships that benefit both customers and local communities.