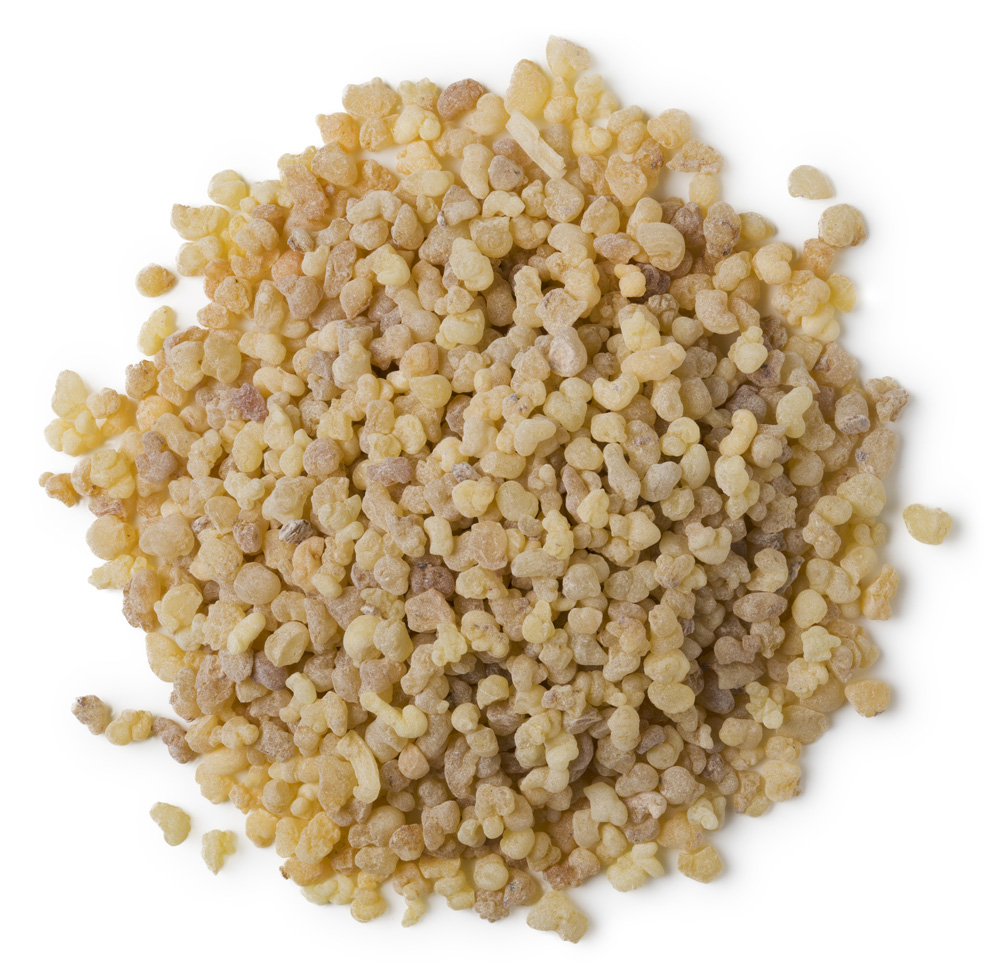 39
Products with this ingredient
View all products

As you close your eyes and inhale olibanum oil, you see yourself walking in a pine and eucalyptus forest, your steps taking you to a sun-bathed clearing. Here, a steamy spring welcomes you in its warm and surprisingly citrus-scented water. While you thought you couldn't be more relaxed, a misty incense smoke spreads around you, balancing and settling your mind once and for all.

Also called frankincense, olibanum resinoid was one of the first materials to be used as a perfume. Firstly burned as incense and used during religious ceremonies by ancient civilisations, it became extremely popular at the time of the pharaohs, where it was also used in the embalming process. It retained an important role in religions throughout the centuries, to purify the air, ward off evil spirits and soothe the environment.

Olibanum resin is mainly produced in Somaliland, an autonomous region in northern Somalia. This area is the home of more than half of the world's olibanum and myrrh trees, which have become endangered as farmers are forced to over-harvest due to the low prices they receive.

Lush buys olibanum oil and resinoid from two suppliers who work directly with Somali producers, guaranteeing fair prices and sustainable production. One is based in Morocco and the other in Vermont, USA, where they obtained the first organic certification for olibanum oil in the world. They sell the raw resin or distil it into a fragrant oil, that is known to be toning and soothing for the skin.

Olibanum Oil can be found in these products

Frankincense, also known as olibanum, is a woody and sweet resin. Here's how we source this beautiful ingredient...

This sticky and smoky scented ingredient softens and heals the skin, which is why we use it in Happy Hippy, King of Skin and Ceridwen’s Cauldron. It comes from East Africa, however the history of the area, its climate and the exploitation of its people have led to frankincense becoming an endangered species. Because of its brilliant properties, we still want to use frankincense and through responsible purchasing, provide a market for fairly purchased and sustainable frankincense. The frankincense trees grow in rocky, mountainous terrain. The resin oozes out of small cuts in the bark, and forms into beads as it hardens. The land is owned through a clan system, so trees cannot be sold, and are only worked on by men, while women in the family sort the different grades of resin.

Our frankincense comes from Somaliland, an autonomous region in the north of Somalia.  Somaliland is not yet an internationally recognised country but it does have its own government that was established in 1993, after the union between what were the colonial territories of British Somaliland and Italian Somalia were dissolved.

During Somalia’s military dictatorship in the 1970s and 1980s the price for frankincense was high, as the government organised farmers into co-ops and sold the frankincense centrally. When the dictatorship ended resulting in years of civil war, the price dropped and frankincense harvesters lacked access to a fair market. Harvesters sold the resin for $1 a kilo, which was then sold abroad by middlemen for up to 50 times the price. Not receiving a fair price for their goods has led the communities to over-harvesting the tress in a desperate attempt to earn a living in an area at risk of famine.

In 2011 we found a new, direct source, the first certified organic frankincense oil! This oil comes from trees harvested in the Sanaag region of Somaliland. The harvesters know that they had not been receiving a fair price and that organic certification has been the first step towards both a sustainable production model and a price that matches the value of their product.

We are excited to work closely with our supplier and their community, and they became one of the first suppliers to receive our support through the SLush fund: our initiative that supports regenerative farming and community projects. We have been working in 3 villages to increase access to much needed water. SLush has funded three solar wells, which powers water harvesting and washing and toilet facilities. Water collection is the responsibility of women, so the new wells not only means that everyone in the community has access to water, but also that women and girls now have more time for education.

Access to water was the community’s first priory, and now this has been established we are committed to working with them, to support regenerative farming and harvesting of the precious frankincense trees.