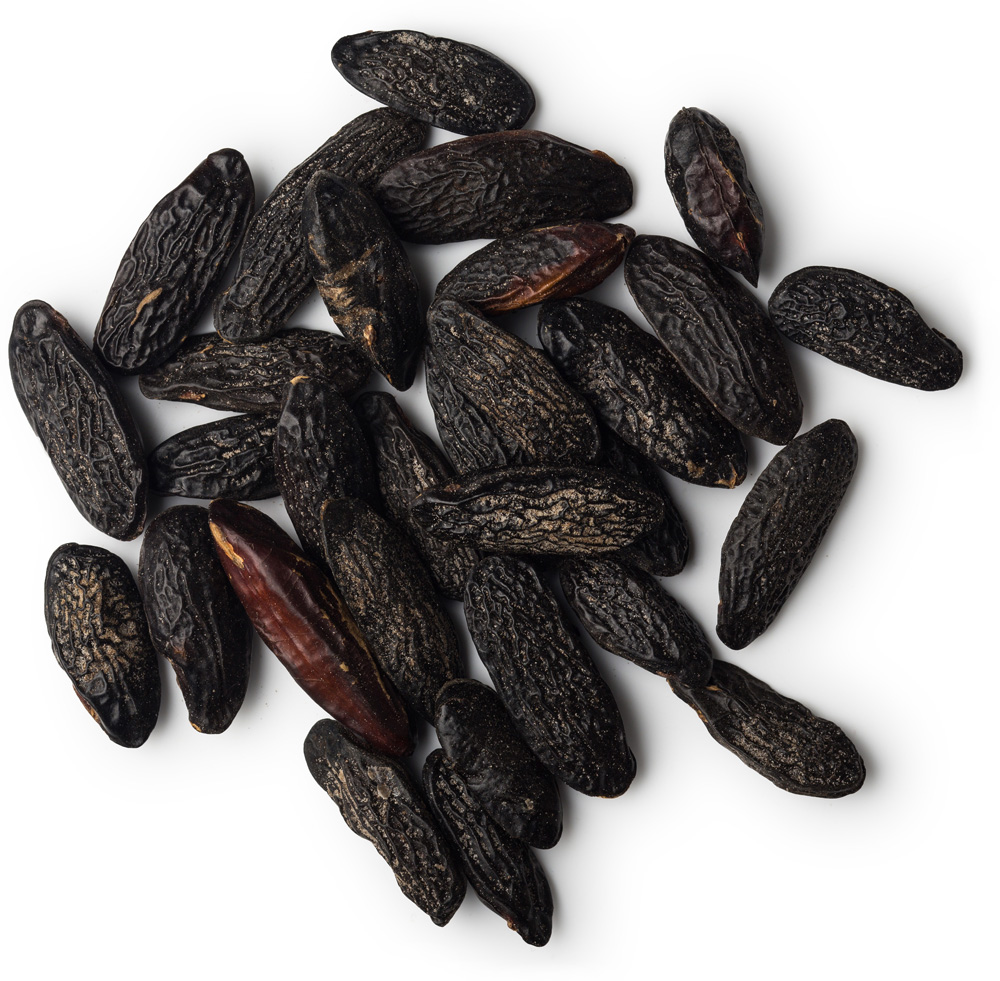 67
Products with this ingredient
View all products

Though tonka absolute is very soothing to the skin, it is especially sought after for its sweet and comforting aroma.

The tall camaru tree (Dipteryx odorata) belongs to the legume family (Fabaceae) and grows in Costa Rica, Brazil and Peru. It bears fruits that contain a single seed, oblong and smooth, called the tonka bean.

Some will quickly say that tonka smells of vanilla, but the bean has its own perfume. It is sweet, but also fruity, reminiscent of cherries and bitter almonds, and has notes of hay. This complex scent is mainly due to coumarin, an aromatic compound that naturally occurs in tonka, in such quantities that it creates a white crystallized coating around the bean when it dries.

Lush buys tonka beans directly from Kayapo communities of the Amazon rainforest in Brazil. They pick up fallen fruits and break them one by one with a hammer to release the precious beans. Dried in the sun and gathered in big bags, they are then sent to France, where they are transformed into an absolute.

Tonka Absolute can be found in these products

Dirty
Shaving Cream
For a clean, soothing shave
£14.50
/
225g
Death and Decay
Perfume
Step into the light
£95.00
/
100ml
Only Available In Gift
The Experimenter
Bath Bomb
Colourful, crackling baths
£4.95
/
Each

Bonkers about tonka: Saving the rainforest one bean at a time

When you think of the Amazon rainforest, you probably think of trees. A rich tapestry of tropical birds and wildlife; jaguars, tapirs, monkeys and a whole host of insects. Perhaps you think of deforestation? In recent years, global awareness of the plight facing the biggest forest in the world has increased.

Whatever you think of, it probably isn’t the sweet-smelling tonka bean, much less the ice cream, sweets and fragrances it’s included in. But in Brazil, in the middle of the Amazon rainforest, indigenous communities harvest the aromatic bean. This not only offers them an additional income , but helps protect rainforest trees from being felled for lumber, or to make way for destructive cattle farms, mining and logging.

Tonka beans are the fruit of the towering cumaru tree (a member of the pea family), which can grow up to 30 metres tall. The beans have many uses in food, fragrance and in pharmaceuticals. What’s more, tonka beans are a non-destructive crop that  grows alongside a wide range of plants and vegetation. By collecting and drying the fragrant bean, indigenous communities are able to access an  additional income, while also helping to regenerate and protect the Amazon rainforest.

The Amazon is the largest rainforest in the world, spanning over eight countries in South America, with almost 80% occurring in the single country of Brazil. Millions of people, especially indigenous groups, depend on it for subsistence , such as food, resources and medicine. Despite this, in the last 40 years one fifth has been deforested. To help protect it, government legislation and protection has been put in place - and the rate of deforestation has reduced since 2004. However, governance can be weak across the region and deforestation is still happening.

Perhaps not surprisingly, the areas where the forest is most dense are those in which indigenous communities reside - and from which the outside world is prohibited from affecting. While being the only people permitted by law to fell trees in the forest, the areas where indigenous people make their homes continue to flourish.

In Brazil, indigenous lands constitute a legal form of protected area, which means that indigenous inhabitants have permanent and exclusive rights to their traditional lands. Legally, no outsiders are allowed into an indigenous territory without federal government authorization, and no industry is allowed as this could destroy the forest ecosystem on which indigenous culture and livelihood is based.

“Having an indigenous land protected by federal law means farms can’t get bigger and bigger with soya or any other monoculture. The protection is working as a shield. No one can go in there and cut the trees down, only legal indigenous groups can live in these areas.”

However, the regulation does not completely protect the forest.  Law enforcement can be weak throughout the vast region, and the threats to indigenous territories and other protected areas continue to intensify: illegal logging and gold mining as well as hydro-dam building and even political in-fighting all pose a risk to the territories.

To counter these risks, non-governmental organizations (NGOs) are working with some indigenous tribes to empower them to protect their land against these threats.

Adriano Jerozolimski from the Protected Forest Association  explains: “Indigenous groups are Brazil and the world’s future guarantee. In Brazil, there are 252 indigenous peoples with an incredible diversity of knowledge about forests, rivers, and forms of organization that can, and are already are, inspiring the next step of organising local and global societies.

“Analysing the portions of forests and rivers preserved today, it is very easy to see that where there are indigenous and other traditional peoples, there are forests! The role of traditional populations in conserving and even increasing biodiversity is the key!”

One important strategy is to help indigenous communities gain access to markets for their sustainably harvested non-timber products so that they can generate the income needed to buy the manufactured goods they have come to depend on after contact with outside society. The NGOs play an important role in explaining the foreign capitalist culture of outside society to indigenous groups and the nature of the threats they face.

Sustainable income from wild forest products, such as the tonka bean, in combination with information and support for territorial monitoring and surveillance is proving to be the key for persistence of intact indigenous territories and cultures within the vast areas of the Brazilian Amazon.

Lush sources tonka beans from different communities in the Xingu river basin, situated in the southeastern region of the Brazilian Amazon  - an important area for biodiversity in Brazil. Buyer Livia explains that by helping to encourage regenerative trade in the area, both indigenous communities and the rainforest are preserved. She says “The Xingu territory  is a strong indicator of the environmental diversity of the Brazilian Amazon, as it constitutes one of the most extensive sets of interconnected protected areas in the world. It has a very high environmental diversity, encompassing two biomes (the Amazon and Cerrado) with hundreds of forest landscapes and housing several communities with different cultures and languages.”

Tonka is collected Kayapo communities that are represented by their three local NGOs, AFP, Kabu Institute, and Raoni Institute. The Kayapo NGOs, together with other traditional people of the Xingu river basin ands its partners, participate in an innovative integrated Certification Of Origin, lead by the NGO Imaflora, called Origens Brasil.  The sale of the tonka bean, which is collected from the ground in the dry season (between June and September), has proved an important alternative income for the communities.

Tonka is collected from the forest floor where they fall from high in the tree canopy and brought back to the village  where the beans are manually extracted from their shells. They are then laid out in the sun to dry - turning a rich brown during the process. The sweet beans, which smell like spicy vanilla, are then gathered together and taken to storage facilities in local towns from where they are  packed and shipped to Lush UK.

Lush buys tonka directly from the communities that gather it - avoiding middle men who take a cut of the profits. What’s more, Lush endeavours to pay communities an upfront amount for their tonka, instead of delaying until the goods are shipped to the mainland. This means communities get the money they expect as quickly as possible - encouraging them to continue with the yearly venture and continue to cultivate the forest. So, while you’re enjoying your favourite sweet tonka treat, you can rest assured it’s helping to establish this regenerative and sustainable trade within the Amazon too. Sweet!

Tonka Beans | Lush Buying Story
0.00 (0)
Cancel
Back
Choose your knot wrap Confirm knot wrap design
Accept Cookies
Fancy a Chat?
For live chat we use a third party provider called Olark. In order to function, Olark requires additional session cookies be stored on your browser, which allow the person you’re chatting with to see which lush.com pages you are visiting so that they are better able to help you. Please click OK if you are happy to proceed with this.